Take a fresh look at your lifestyle.
ARY Blogs 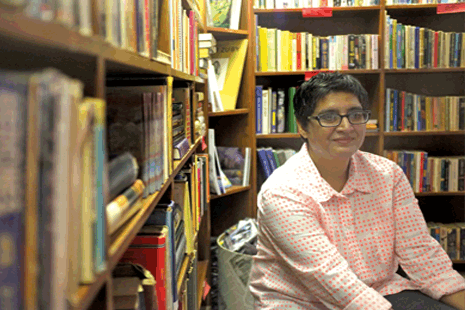 Sabeen Mahmud: The World Mourns You

Social activist and human rights campaigner Sabeen Mahmud was horrifically gunned down and killed, in Karachi on the evening of Friday 24th April 2015. She was returning home from work with her mother, who sustained serious injuries in the attack.

Sabeen Mahmud was the Director and founder of The Second Floor (T2F) in Defence Phase II, Karachi.  She was returning from a debate on Balochistan and had been receiving death threats beforehand.

The terrorists may have eliminated the person but they have strengthened her ideology which will remain forever. Her legacy cannot be killed.

Sabeen was a rare, unique, courageous personality who fought for social justice and change for good.

In 2006 she launched The Second Floor (T2F), which developed into a resounding success. Her bold approach had the vision for a community space which could be used for open dialogue, a meeting place for all. The initiative was of a comfortable bookstore/cafe setting for a variety of people to discuss and explore many themes. She brought together arts, culture, technology and science. A social arena for peaceful activism, politics and culture. The progressive ideas gave Sabeen national and international recognition.

However her focus was to produce and run a platform for social good not materialism. She stood against injustice, discrimination on a daily basis. She fought for all colours, creeds and religions. Her work was a peaceful revolution for tolerance, social awareness and positive change.

Even in Pakistan’s deeply troubled times she saw a light at the end of the tunnel. That was her motivation. Sabeen Mahmood was not afraid to raise a voice for the oppressed, standing in silence just wasn’t her style. Her spirits as a human rights activist stood strong to the end, even when she was aware of the associated dangers.

She was quoted in the past as saying  ‘Fear is just a line in your head’.

Sabeen was a social entrepreneur, a thoughtful person who gave much to the community she served. She wished to resolve conflicts through intellectual and cultural engagement.

Her background was in graphic design, media and technology. She was an accomplished writer. Sabeen could easily have stayed quiet, taken employment elsewhere and lived a comfortable life. However the passion for social change that burned within her could not be held back. Her role in life was to work for all the citizens.

Sabeen Mahmud indeed is an excellent role model an inspiration to the younger generation.

Her loss will not only be a deficit for Karachi and Pakistan, but the whole world.

I reach out to all Pakistanis to not let Sabeen Mahmud’s murder silence you, instead collectively raise your voice for her aims of social justice, she would have done exactly the same for us.

We need hundreds and thousands of Sabeen Mahmud’s rising across Pakistan to remove social injustices, promote tolerance and rid our country of hate filled extremism.

We are all equal human beings in Allah’s world, we need to actively find ways to live peacefully.

If Sabeen Mahmud was prepared to die for her beliefs, we should be courageous enough to raise our voices for what she believed in.

Sabeen Mahmud your legacy and passion will live forever. May Allah give her a place in Heaven.

Is PTI all set for another embarrassment?

Why have K-Dramas Become So Popular in Pakistan?