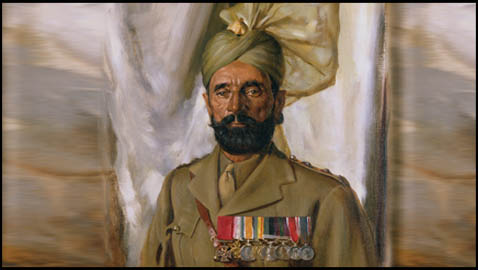 A striking oil portrait on canvas of Khudadad Khan, by Hal Bevan Petman (c1935) is one of the collections at the National Army Museum, London. He was the first South Asian and Muslim to receive the Victoria Cross. The highest military award for gallantry in the face of the enemy. Indian troops were first made eligible for the Victoria Cross in 1911, prior to this they were awarded the Indian Order of Merit. Here I explore the history of this great soldier.

Khudadad Khan was born on 20.10.1888 in Dab village, Chakwal, in present day Pakistan. He was a Muslim of Rajput descent. He went on to serve as a Sepoy (Private) in the 129th Duke of Connaught’s Own Baluchis battalion, as a machine gunner.

In October 1914, in the early stages of the Great War, 20 000 Indian troops were sent to the front line on the Western Front. (A total of 1.2 million Indian soldiers were involved in the First World War overall). These included the 129th Baluchis and a 26 year old Khudadad Khan. The Germans were launching their offensive in Hollebeke, Belgium. This was the setting for the First Battle of Ypres. The newly arrived Indians found themselves in a cold, wet, dark environment. Very different from their home country, they had little time to acclimatise. The 129th Baluchis were pushed to the front line to aid the Allies. They were outnumbered 5 to 1 by the better equipped enemy. The shallow, water logged trenches provided little protection. There was no defensive barbed wire. There were many gaps in the line, as soldiers were few. Communications were difficult and smaller units often became isolated, surrounded by the enemy. The Germans had advanced weaponry and hand grenades. As you can expect from the situation, the outnumbered 129th Baluchis were pounded endlessly by the Germans, sustaining heavy losses and casualties.

On 31st October 1914 at Hollebeke, Khudadad Khan together with his crew, was one of two groups each manning a Vickers machine gun on the front line. Then one gun was taken out by a German shell, the commanding British Officer Capt. F.F.Dill suffered severe injuries, 5 fellow Indians were killed by bullets and bayonets. Despite the odds, alone and wounded Khudadad Khan stood his ground, continuing to fire his machine gun. Keeping the German frontline at bay, preventing a breakthrough.  He finally fell, kept still and was left for dead by the enemy. After deactivating his machine gun, despite his injuries, under the cover of darkness he crawled back to his regiment. Thanks to him and his comrades the Germans were held up long enough for reinforcements to arrive. As the defences strengthened, the Germans were prevented from reaching the strategically vital ports of Boulogne, France and Nieuwpoort, Belguim. Had the Germans succeeded the important supply chains of food and ammunitions would have been disrupted from England to the Allies on the front line.

In extreme adversity Khudadad Khan had held his position and greatly assisted the Allies. He recovered from his injuries in an English Hospital, The Indian Convalescent Hospital, New Milton, Hampshire.

Khudadad Khan went on to have a long career in the British Indian Army and retired as Subedar (Lieutenant). He passed away at the age of 82 years, in Mandi Bahauddin, Pakistan on 8.3.1971. His bronze, full sized statue is present at the entrance of the Pakistan Army Museum, Rawalpindi.

On 31st October 2014, 100 years since the act of gallantry, Lord Tariq Ahmad of Wimbledon (Minister for Communities) unveiled a commemorative stone at the British Library in Khudadad Khan’s honour. This stone will be laid at the National Memorial Arboretum (Staffordshire) on Commonwealth Day, 9th March 2015. Lord Tariq said ‘In honouring the courage of Khudadad Khan we not only remember our shared history, we also cherish the long tradition of Muslims fighting alongside British Soldiers, for a just cause in the service of this country’.

Two former heads of the Army, General Lord Dannatt and General Lord Richards led a group of peers, MPs, historians, religious leaders and think tank British Future to write a letter to ‘The Telegraph’, on 31.10.2014. They called for better education regarding the contribution and sacrifice by the 400 000 Muslim troops in the First World War, as exemplified by Khudadad Khan, who fought side by side with the British troops.

On 10th November 2014, at the British High Commission First World War Centenary reception in Islamabad, Pakistan the three Victoria Cross recipients of present day Pakistan were honoured. These included Sepoy Khudadad Khan, Jemadar Mir Dast and Naik Shamamad Khan. Also honoured were the 460 soldiers of Dulmial ‘the village with the gun’, that participated in the Great War.

Also read;  Dulmial, Pakistan- ‘The Village with the Gun’

By describing the brave actions of Khudadad Khan, my aim is to reflect and remember the immense courage and sacrifices of the Indian Army soldiers 100 years ago. I do not wish them to be ‘forgotten’ any longer.

Game of Thrones villains who stole the show!

Game of Thrones villains who stole the show!