In what came as a shock to the incumbent dispensation and its supporters, the Election Commission of Pakistan (ECP) practically rejected the Electronic Voting Machines (EVM) and declared them as convenient vehicles for electoral malpractices and fraud.

ECP came heavy on the EVMs and pointed out no less than 37 objections to the functionality of this device and declared it to be totally unfit for the task that it is going to be used for. More importantly the stance taken by the ECP has rendered redundant the furious publicity drive of the federal government whose army of spokespersons paraded the machines on every TV screen available in the land describing them to be the panacea of all electoral ills associated with democratic governance.

The PTI government had built an electronic voting machine which was unveiled on 22 February and on 7 August and Prime Minister Imran Khan was given a demonstration of the EVMs. Imran Khan believes that the sole solution to fraud and rigging is technology.

He claimed that the next election would be historic and the results would be acceptable toall parties. According to Minister for Science  and Technology Shibli Faraz, the machines can work without the internet and Wi-Fi. They can test rigging during and after the polls and help with audits too.

The ECP made a presentation in front of Senate Standing Committee on Parliamentary Affairs, and warned that the machine was tampering-prone and its software could easily be altered. The ECP asserted that it is nearly impossible to ensure that every machine is honest and the chances are that they may all prove faulty.

Significantly, representatives of civil society also attended the meeting and opposed both the plans to introduce EVM and internet voting for overseas Pakistanis. This presentation was held in the context of voting on two controversial bills seeking to amend the elections act.

This issue has attracted widespread concern as it is strongly suspected that the arbitrary authorities are planning the next elections in favour of the PTI and this time round the responsibility of any malpractice will be shifted over to the machines absolving personnel supervising the electoral process.

Along with raising technical objections, the ECP also showed concern about the short time duration available for large-scale procurement and deployment of EVMs and imparting training to a massive number of operators adding that it was not advisable to introduce EVM nationwide in one go.

It said the polls on one day as required under the law would be nearly impossible. The ECP also referred to various other issues linked with the use of EVM, including lack of ballot secrecy, lack of capacity at all levels and lack of ensuring security and chain of custody for the machines at rest and during transportation. 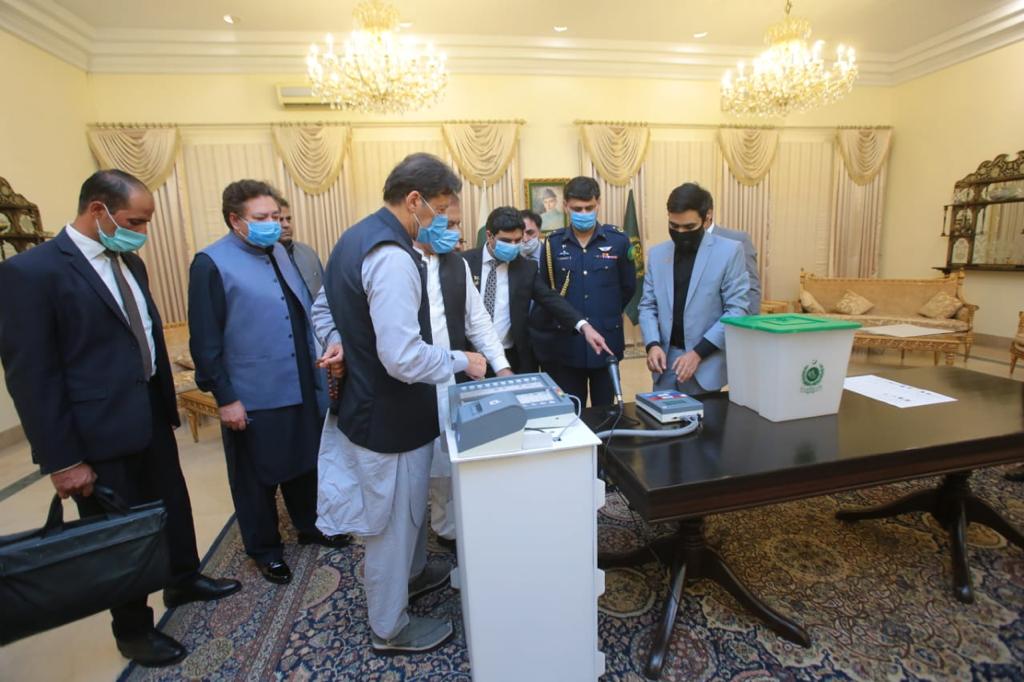 It also pointed out that there would be no evidence available in case of election dispute. The ECP noted that data integration and configuration issues may crop up due to court orders at the eleventh hour regarding a change in ballot paper.

The commission said there was an absence of dust and humid free controlled temperature environment ware house for storage. It said a huge learning curve was required for technical operators, adding that there was no consensus among the stakeholders on EVM which was also not financially feasible.

The ECP continued by stating that EVM could not prevent low voters’ turnout, low women’s turnout, misuse of state authority, election fraud, electronic ballot stuffing, vote buying, the law and order situation, dishonest polling staff, widespread political and electoral violence and abuse of state resources. It went on to say that in case of introduction of the technology in haste, the conduct of free, fair, credible and transparent elections as per the Constitution was not possible.

It was pointed out that Germany, Holland, Ireland, Italy and Finland had abandoned the use of EVM due to lack of security. About prerequisites for introduction of EVM, the ECP said these included availability of a secure and reliable solution, political consensus among the parties represented in parliament and amendments to the Constitution, acts and rules, infrastructure deployment for staggered elections, threat models and risks assessment and disaster recovery plan. It was pointed out by the ECP that it was certainly in favour of technology but it must be secured and tested.

Moreover, ECP assert ed that there should be a consensus among the stakeholders and EVM must not be intro duced in undue haste and spoke against using these machines for the next general elections. The EVM cannot stop rigging, the secrecy of the ballot paper will not be ensured and the results would also be delayed, the ECP said in the report.

It was emphasised that neither were the polling staff members sufficiently conversant with technology nor was the public to the level that they could easily understand how to use the EVM pointing out to the defect that it is not user-friendly. Even though a lot of money has been spent on this, it cannot ensure credibility and transparency for the election. The ECP also pointed out that during elections, ballot papers often have to be changed at the last minute depending on court decisions.

So it will not be possible to feed that fresh data into the machine immediately. Responding to the objections raised by the ECP on EVMs the government mentioned that it has submitted a report to a technical committee of the ECP that addressed all the problems pointed out by the ECP.

The government side expressed its determination to do the legisla tion needed and use EVMs in the 2023 gener al elections.

The government minister stated that he was not interested in what international experts had to say about the EVM. The PTI-gov ernment had offered political parties to bring in their own experts, including from abroad, to analyse the machine. He assured that the country had the capacity to produce the number of electronic voting machines that would be required for elections.

When it is done, all state institutions will have to follow it and there cannot be a question of opposition. Despite the opposition of the ECP, the government appears determined to have its way and its ministers are insisting that a pilot project should be carried out in the intervening period. He also came up with an alternative proposal of continuing with the existing voting system only with an addition of voter slip reading machine for vote count.

Diplomacy and its Impact on International Cricket